The concluding part of the guest blog by Tilak Bhattacharjee on his musings with kanji.
.
The word “shinonome” actual origin comes from a special type of bamboo plant unique to Japan called “Shino/Sasa” in Japanese and its scientific name is “sasamorpha borealis(篠 )“.
These were dried and knitted together to form a net-like structure having large gaps in between.
These gaps are called eyes and since they are made from “Shino/篠” they came to be known as “eyes of the Shino/篠 plant” or “shino-no-me (篠の目) “.
(目 is kanji character which represents “eye” and its KUN-yomi is “me”. の(read as “no”) is connective particle which here implies “of”  and connects the two nouns in context “eye” and the “Shino plant”.)
The analogy as to why they are called eyes would be same if we compare it to  “eye of a needle” which is the the section of a sewing needle formed into a loop for pulling thread, located at the end opposite the point.
So since this knitted structure made of “Shino plant” was used a skylight, so that the first sunrays of a day enters through its gaps(or “eyes”) into a traditional Japanese house, the word “shinonome” symbolized the meaning of “daybreak”.
Thats the beauty of the Japanese language we can relate to so many topics just through one word. 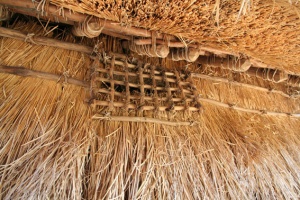 A guest blog by Tilak Bhattacharjee on his musings with kanji. This is the first part of a two-part blog post.

A skylight in a Japanese house. Photo credit: Atsushi Ishikawa